I love live TV.  Correction – I love TV in general. I have far too much time on my hands.

In 1997, Gay Byrne was hosting the Late Late Show.

His two guests of the evening were a nun and Irish poet, Brendan Kennelly.

The night was going well – at the midpoint of each episode, they usually hosted a phone-in competition. You know the format; they ask an unbelievably easy question, get people to send in the answer, and they pick one person to call and tell them congratulations! you’ve won a prize!

This evening was no different.

The prize of the evening was a new car and Byrne dials the lucky winner.

The phone is answered by a quiet sounding woman. She sounded meek, even when told she had won.

“Are you watching the show tonight?” 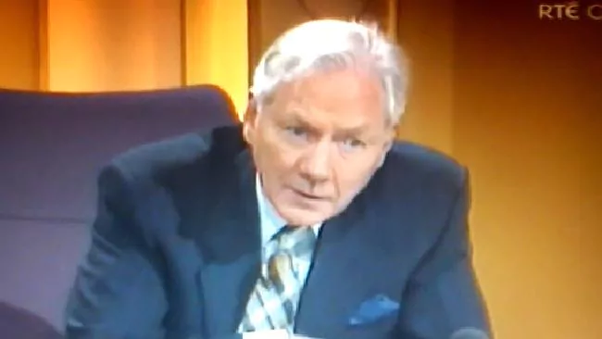 (Byrne, when hearing the news)

Instantly there were gasps and Byrne’s face drops and his tone changes.

You have to remember that this was live TV. Thousands of people, including a studio audience full of people, were sat in front of him. Byrne probably also had his studio team giving him instructions in his ear. So, he flubbed, and very inelegantly asked:

“Are you being funny?” she shot back.

“She got knocked down. She was in a car crash last night.”

It turned out that it was Rita’s daughter who had entered the competition – she was so hoping to win a car and it was a car that ended her life only a day before.

Byrne, being the fantastic host that he was, realised that he should really give Rita, the poor woman, an out if she wanted it.

“Good heavens. Well Rita, I don’t think we can continue with this in the circumstances. Do you want to?”

This led to applause from the audience and Rita continued.

The first guest, the nun, offered her some consolation, saying that it surely was no accident that the postcard was picked tonight.

Next, it was passed to the poet, Kennelly, who recited one of his most famous poems, “Begin,” from memory:

“Though we live in a world that dreams of ending
that always seems about to give in
something that will not acknowledge conclusion
insists that we forever begin.”

Towards the end, Rita was quietly weeping.

Byrne then tells her that she has the support and prayers of the entire country, and Rita, in turn, told Byrne that she felt it was important to stay on the line for her daughter, that she was accepting the prize “for her”.

I’m describing this clip because I can’t find the full version of it anywhere.

The only version I can find is on this article here, but it is shortened and doesn’t give the full effect: Talk show host’s phone call takes heartbreaking turn live on air

Graham Norton, the extremely popular Irish chat show host of his own show on the BBC, actually once said that this moment inspired him to move into chat shows.

Gay Byrne died recently at the age of 85, after a short illness battling cancer.

He will forever be missed and remembered fondly by Irish people of a certain age.

My head is filled with useless knowledge that I'll likely never need.